Richard Davis is CEO of Make-A-Wish®, an organization that grants a child’s wish every 24 minutes, and has been changing the lives of more than 330,000 critically ill children since the first wish in 1980.

He began his career as a teller, and since 1993, has been a “banker” at legacy companies of U.S. Bank. Rising through the ranks, Richard became CEO in 2006 and Board Chair in 2007 of U.S. Bank, the 5th largest U.S. commercial bank, headquartered in Minneapolis with over 72,000 employees and more than $460 billion in assets. Under Richard’s leadership, USBank was named one of the “World’s Most Ethical Companies” and in 2010 he was selected by American Banker as “Banker of the Year”.

Tune in to hear Richard’s focused approach to leading with integrity, conviction, purpose and persuasion! 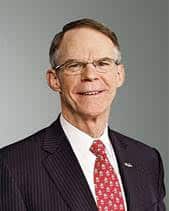 As leaders think about the impact they wish to have on their organizations and followership, Richard Davis shares “What I would like to leave behind, is a sustainable, predictable, repeatable path.”

Richard has been involved in many nonprofits, having served on 11 boards, including the National American Red Cross, Minnesota Art Institute, the University of San Diego, instrumental in starting “Step Up,” a Twin Cities program that gave more than 18,000 distinguished teenagers their first “professional” summer jobs. He also served on the Twin Cities YMCA.

Especially during the holiday season, it is our honor to share Richard’s insights and thoughtful leadership on another game-changing episode of Leadership Reimagined – A Powerful, Persuasive CEO – From Banking to Making Children’s Wishes Come True.